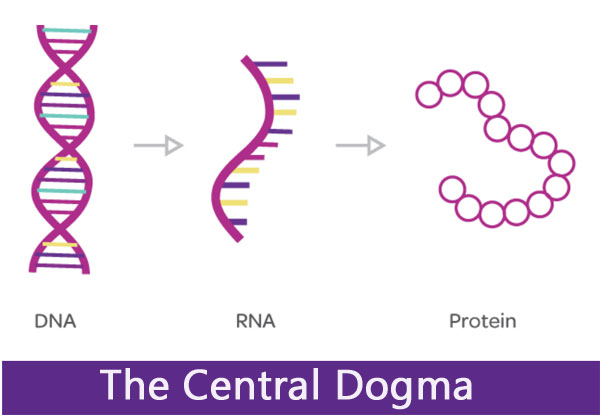 It consist of two steps process that called transcription and translation. It represents the flow of genetic material in an organism, in a sequence, in biological system.

it includes RNA and DNA.

The primary structure of DNA:

Formation of phosphodiester bond in DNA:

In the double strands of DNA the number of guanine bases present are equal to the number of cytosine bases similarly the number of adenine bases are equal in number to the thymine bases.
The second rule is that the formation or composition of the molecule of DNA changes among specie to specie.

Thus facts from rules are:

There are known 3 different types of DNA. Including A type, B type and Z type of DNA.

Packing of DNA molecule in chromosome:

Eukaryotic DNA is packed by . Nucleosome is the structure in which DNA is wrapped around a histone protein this occur after every 200 Base pairs. Nucleosomes combine with each other turn into higher denser structure that is chromatin these are actually responsible for the exact packing of chromosome in eukaryotic cells during mitosis of cell division.

The nuclear DNA consist of gene but rather than this there are other region that cause replication and compact packing of DNA. These regions are: heterochromatins, scaffolding DNA region, telomers centromeres and DNA replication region and euchromatins.