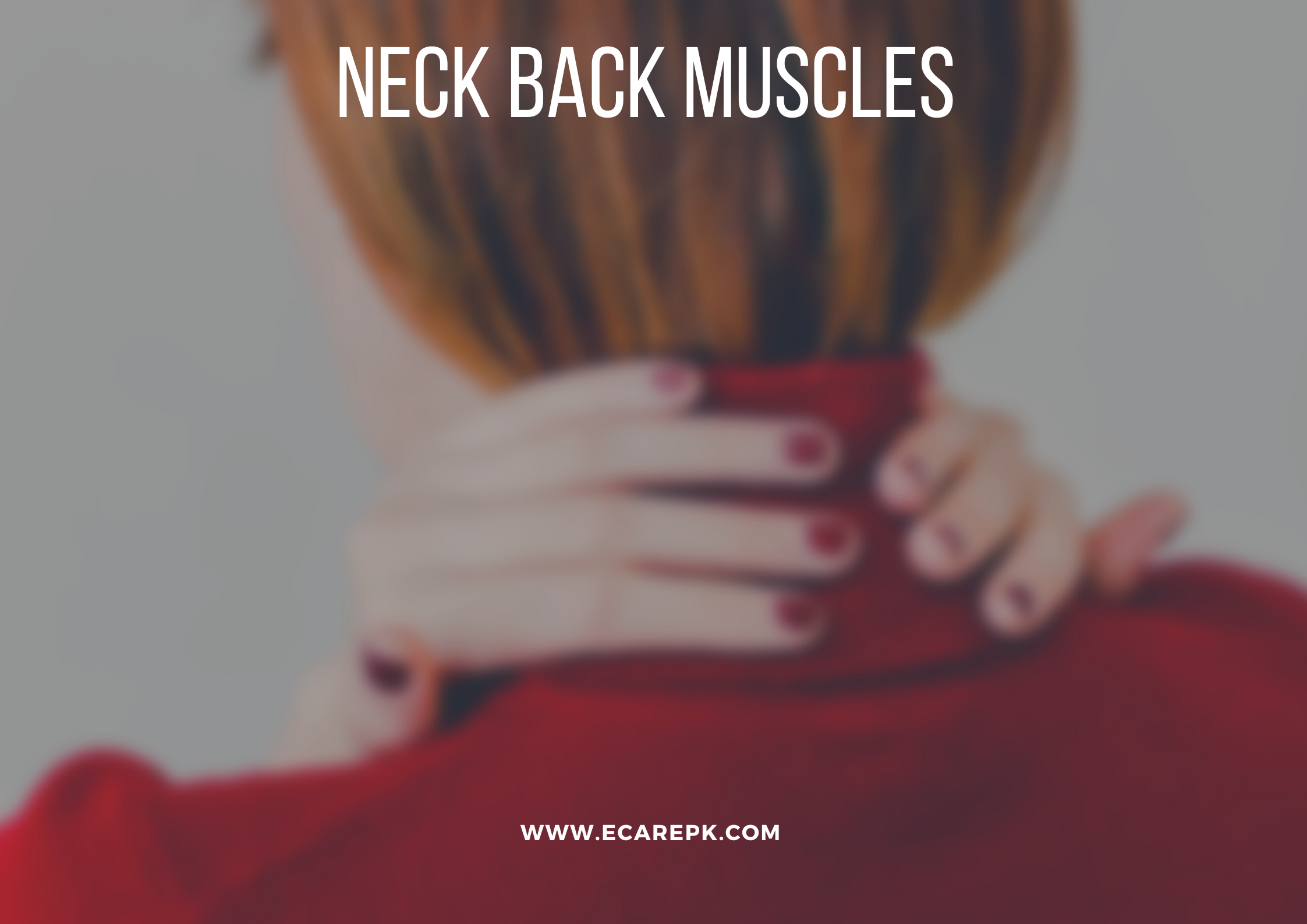 Underneath the integument the rear of neck presents in the middle plane the ligamentum nuchae, which is a three-sided stringy sheet and addresses up continuation of supraspinous tendon.

Back boundary of the tendon is free, foremost line is joined to the cervical spines and its better line is connected than the outside occipital peak and outer occipital projection. The ligamentum nuchae isolates the muscles of the different sides of neck.

Muscles of the back:

The muscles of whole back are organized in three gatherings—shallow, middle of the road and profound

The shallow gathering follows up on upper appendages and incorporates the accompanying:

(a) Trapezius and latissimus dorsi;

The moderate gathering is respiratory in real life and contains serrati back predominant and mediocre. Both shallow and middle gatherings have relocated in reverse across the profound gathering of muscles, and are provided by the ventral rami of the spinal nerves.

The profound gathering structures the inborn muscles of the back and is provided by the dorsal rami of spinal nerves. It comprises of the accompanying from outside internal:

(a) Splenius capitis and cervicis;

They structure a wrap to cover profound gathering of muscles; thus the name splenius. Each muscle emerges from the lower half of ligamentum nuchae and from upper 4 to 6 thoracic spines. It passes up and along the side in hemispiral way and isolates into-splenius capitis and splenius cervicis.

The splenius capitis passes profound to the trapezius, frames the floor of the back triangle of neck and vanishes underneath the sternomastoid for inclusion into the mastoid cycle and parallel third of the prevalent nuchal line of occipital bone.

The splenius cervicis lies profound to the levator scapulae and is embedded into the back tubercles of cross over cycles of upper four cervical vertebrae.

The erector spinae or sacro-spinalis is a lengthened section of muscle and reaches out from the sacrum to the skull. It lies profound to the back layer of thoraco-lumbar belt in the lumbo-sacral district, serratus back second rate and prevalent muscles in the thoracic locale, and is covered by the splenius muscles in the neck

The muscle takes a U-formed beginning by plump and tendinous filaments, covering the multifidus, from the lower two thoracic and lumbar spines, from the middle and sidelong sacral peaks, from the internal piece of the dorsal section of the iliac peak and from the connecting tendons. Near the last rib the erector spinae parts into three sections—iliocostalis, longissimus and spinalis.

The ilocostalis, the sidelong segment, comprises of three progressive parts—lumborum, thoracis and cervicis. These parts are embedded by a progression of transfers into the points of ribs and into the back tubercles of cross over cycles of C4—C6 vertebrae. The course of action is with the end goal that the addition of one slip is trailed by the beginning of other slip from its average side.

The strands of longissimus capitis are average to the inclusion of the previous series, emerge from the cross over cycles of upper thoracic and articular cycles of lower cervical vertebrae and are embedded into the mastoid interaction profound to the splenius capitis and sternomastoid. The longissimus is the main section of erector spinae that acquires direct connection to the skull.

The spinalis is the average segment of erector spinae and stretches out from the upper lumbar to the lower cervical spines. Its part is mixed with the semispinalis capitis.

It lies under front of erector spinae and comprises of various sideways muscles which expand vertically and medially from the cross over cycles to the spines. The transversospinalis is organized in three layers—semispinalis, multifidus and rotatores.

The semispinalis capitis is a long thick muscle and delivers longitudinal swelling of the neck on each side of the middle wrinkle. Its average boundary is free and is in touch with the ligamentum nuchae.

The muscle is covered somewhat by the splenius capitis and hides under its cover the suboccipital triangle and semispinalis cervicis. The semispinalis capitis emerges from the cross over and articular cycles of lower cervical and upper thoracic vertebrae (C3—T4) and is embedded into the average piece of the space between the predominant and mediocre nuchal lines of occipital bone. Here and there the upper piece of the muscle presents tendinous crossing point.

The multifidus lies profound to semispinalis and comprises of short, slanted groups, each pack being three-sided in shape. The base is comprised of numerous fascicles which pass up and medially, and meet to the spinous cycle as a solitary fasciculus.

The muscle emerges from the dorsal surface of sacrum between its spinous and cross over peaks, from the mamillary processes in the lumbar area, cross over processes in the thoracic and articular cycles in the cervical locale. The groups cross three to five vertebrae in climbing to their inclusion on the spines.

The rotatores are the most unfathomable gathering of multifidus and cross one vertebra, as they pass from the foundation of one cross over interaction to the base of the spinous cycle or lamina next above. The rotatores are best evolved in the thoracic district.

The interspinales are all around created in the cervical and lumbar locales. They are combined muscles, join the bifid spinous cycles of contiguous cervical vertebrae, and elongated spines of the neighboring lumbar vertebrae.

The intertransversii interface the cross over cycles of the vertebrae. In the cervical area they comprise of foremost and back slips, isolated by the ventral rami of the spinal nerves. The back intertransversus muscle is additionally partitioned into average and parallel parts.

The foremost intertransversus muscle and the horizontal piece of back muscle are provided by the ventral rami of spinal nerves, and interface the costal cycles of the touching vertebrae. The average piece of the back intertransversus associates the genuine cross over processes and are provided by the dorsal rami of spinal nerves.

The average part interfaces the frill cycle of one vertebra with the mamillary interaction of the following, and the parallel part associates the costal components of the lumbar vertebrae.

Intertransverse muscles that interface the costal components of cross over processes are provided by the ventral rami of spinal nerves, and the others by the dorsal rami.

Activities of back muscles:

1. Short muscles of the back go about as postural muscles and keep up with the body pose upstanding in man, since most of the body weight falls before the vertebral section.

2. The spines and cross over cycles of the vertebrae fill in as switches to work with muscle activities.

The erector spinae is the central extensor; it is supported by the splenii and semispinalis capitis.

The multifidus is the boss rotator of the storage compartment. The splenius, semispinalis capitis and sterno­mastoid are the boss rotators of the head, helped by the suboccipital muscles.

The splenii of the two sides, acting together, broaden the head. The splenii of one side draw the head and turn the face to a similar side.

Dorsal rami of the spinal nerves:

The dorsal rami of 31 sets of spinal nerves supply sequentially segmental domains. They supply the skin and the profound muscles of the back including the splenii, except for certain intertransverse muscles.

Each dorsal ramus partitions into average and sidelong branches, with the exception of first cervical, fourth and fifth sacral, and first coccygeal nerves. Over the degree of 6th thoracic spine the average branches are cutaneous, and underneath that level the sidelong branches supply the skin.

The accompanying dorsal rami don’t give cutaneous branches—C1, C6, C7, C8, L4, and L5. The dorsal ramus of C1 supplies the muscles of suboccipital triangle and semispinalis capitis. The thicker average part of C2 structures the more prominent occipital nerve which supplies the skin of the back piece of scalp; the average part of C3 structures the third occipital nerve which sup